Aunt Shirley was with Aunt Carmel when she saw Bobby Hill, the rodeo clown, perform at Frontier Days in the 40s, and both went home and started practicing their roping. They shared a bedroom at the top of the stairs, along with their older sister Juanita, and there must have been competition between them as they sharpened their skills. Carmel once told me that Shirley was the better roper when they were girls. Here’s a shot of Shirley doing a trick with two ropes that you probably won’t want to try at home.

They kept on practicing and in the 50s, as I recounted in an earlier post, Shirley and Carmel led The Swift Current Boys Band to victory at the Calgary Stampede:

When she was 17, Carmel started a career in show business that stretched through many decades. I’ve told that story in three more previous posts starting with this one:

Much to Carmel’s chagrin, Aunt Shirley gave up the ropes and chose a different path.

Why give up something for which she had such talent? According to Shirley, her body made her stop. Even by her early 20s her back was giving her problems. Carmel herself once told me that jumping up and down for so many years had pounded her spine to the point that she was an inch shorter than when she was younger. So why was she so critical of Shirley? Because she believed Shirley actually gave up roping for a man, and if there was one thing Carmel couldn’t stand the idea of, that was giving up anything for a man.

Vital Monette was barely a man when he met Shirley: only eighteen, she being the older woman. Carmel had already run off to join the circus, so he didn’t have to deal much with her direct animosity, but there was still the rest of the Gowan family: Irish Protestant Orange stock who were more than a little suspicious of his French Catholic roots. In spite of the less than enthusiastic reception, they married and moved into my father’s house, then still my grandfather’s house, where the family could keep a close eye on him. They likely suspected he was one of those fabled latin lovers who would run off and leave Shirley the first chance he got. 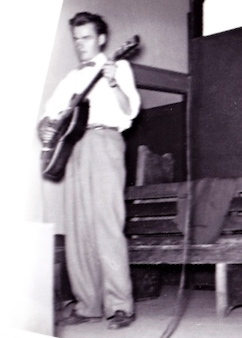 If so, they were wrong. Shirley and Vital bought some land and ranched a few miles from the farm where I grew up. They had three kids: Cindy, Roy, and Carol. I remember visiting them or them visiting us on many a Christmas Eve and other family celebrations. Last summer I saw them at Mom’s memorial, and while Aunt Shirley and Uncle Vital had slowed slightly, they had as much of that vitality contained in his name as ever. Shirley even demonstrated that she doesn’t always like having her photo taken.