I spent the first few nights of my life at the Swift Current Union Hospital and then didn’t spend another night in any hospital through over four-and-a-half decades until 2007, when I shared my father’s room there for a few nights during the last month of his life.

My father may have been born there too. I’m not sure. I know my grandfather met my grandmother when he was recovering from an accident (broke his leg while blasting something with dynamite) in a hospital in Swift Current. My grandmother was a nurse, my grandfather a homesteader. A pioneer.

My father was born on Christmas Eve in 1929. Considering my grandparents’ house had burned to the ground a couple of months previously, it is unlikely he was born at home. So he may well have been born in whatever hospital they had Swift Current at that time.

My mother was a nurse too and worked and lived at the Union Hospital when she first came to Swift Current in the 50s. The place runs like a spine through my life. I tried to find the date when the hospital was built, but couldn’t. It was demolished a few years ago, not long after I spent a couple of nights there in my father’s room. 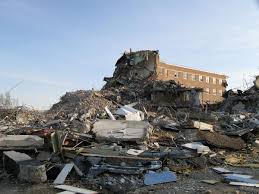 I slept in a cot by the window. The nurses would come by and point a tiny flashlight into the room to check if all was well. In the middle of the night he woke and called me.

“Lee! Lee! Run out to the shop and get me a piece of tin and some tin-snips.”

“I need a piece of tin to cover the hole.”