In ancient Egypt The Beautiful Place referred both to the underworld where the dead went to live and also to the embalming studio where the Pharoahs’ bodies were prepared for the afterlife. Their organs, except the heart, were removed and their bodies were rubbed with oils and perfumes and stuffed with sawdust, then wrapped in linen.

Flash-forward a few thousand years and around the globe to Saskatchewan in 1924.

Sinclair Ross was sixteen years old when he got his first job working for The Union Bank (soon taken over by The Royal Bank) in the tiny town of Abbey, Saskatchewan. Today it would take you about an hour to drive from the farm where I grew up to Abbey.

Ross began writing stories in the early 1930s and published a collection set during the dust-bowl, or “The Dirty Thirties”, as my father called those years of his youth which so shaped his view of the world. The collection was titled The Lamp at Noon. The most well-known story, “The Painted Door”, was so widely anthologized that my favourite Doctor of English Literature, Dr. Ranjini George, remembers reading it when she was studying in India during the 1970s.

In 1940 Ross published his first novel As For Me and My House. The novel takes the form of the diary of Mrs. Bentley (we never learn her first name), the minister’s wife in the prairie town of Horizon, a place which perhaps reveals some similarities to Abbey, Saskatchewan. 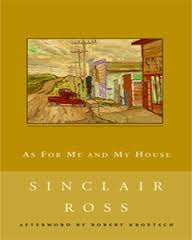 When I moved to an apartment on Comox Street in The Westend of Vancouver in 1985, Sinclair Ross lived in a condo two or three blocks away from me. I may have passed him on the street, but if I did I did not recognize him. I had no idea he was living there.

Seven years ago my boss Ed Carson, at The University of Toronto, School of Continuing Studies, suggested I should make my next novel a sequel to As For Me and My House. I took Ed’s inspiration, put a little twist on it by adding a Sci-Fi element, and wrote The Beautiful Place. The main character, the grandson of Philip Bentley, is the sales manager of Argyle, a cryonics company. The company’s highly secure state-of-the-art facility where they store the bodies of their frozen patients is called The Beautiful Place.

I’d like to acknowledge Keath Fraser’s wonderful memoir As For Me and My Body as a source of inspiration for my novel.

The Beautiful Place took twelve long years to write. I hope you will seek it out and enjoy it.

One thought on “Introducing The Beautiful Place”